The second stop of our trip was Barcelona, where we spent two days.  Martin and I had previously visited Barcelona but back in 2007 when we lived in Madrid before.  So I was excited to visit again since it had been so long.  We only had two days so we picked some of the better things to show mom and dad, namely Gaudí’s Casa Batlló, or House of Bones, the Sagrada Familia and the Park Güell.  The first thing we saw was part of Barcelona’s Gay Pride activities.  I was pretty bummed at missing Gay Pride in Madrid and even though we didn’t get to go to any parties, I’m glad we at least saw this bit and a small parade. 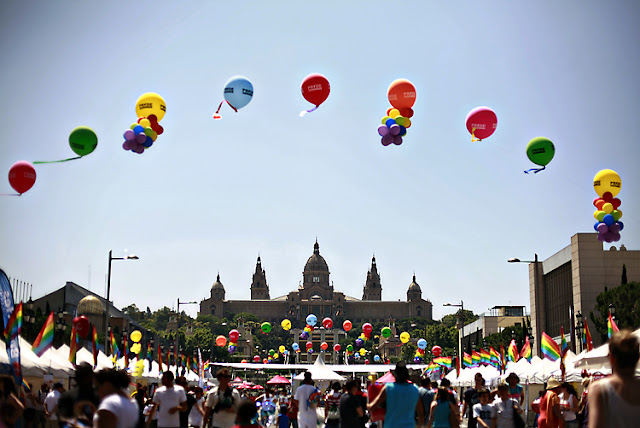 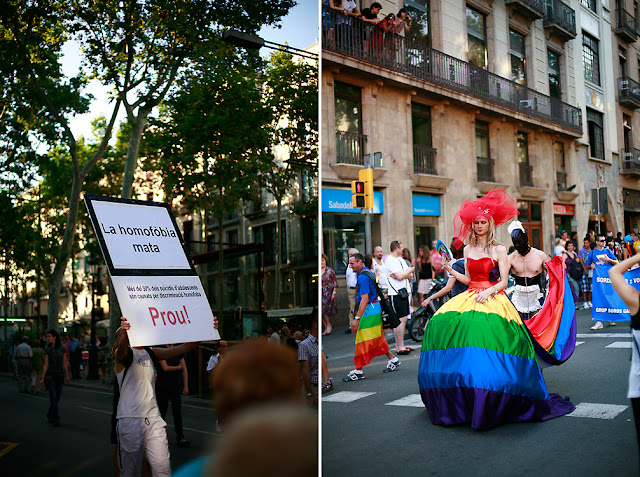 We also came across the people here protesting, the same deal as in Sol in Madrid. 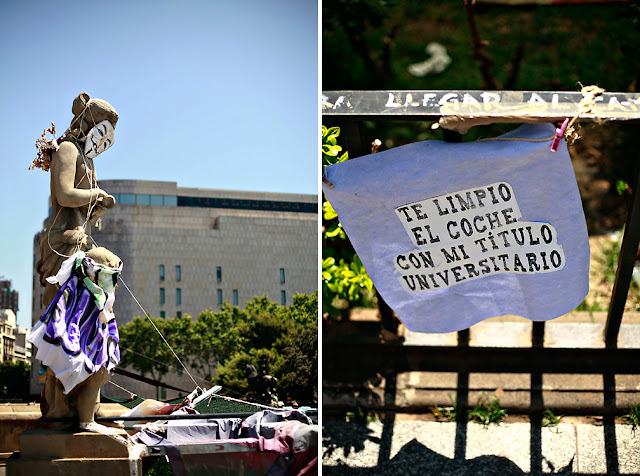 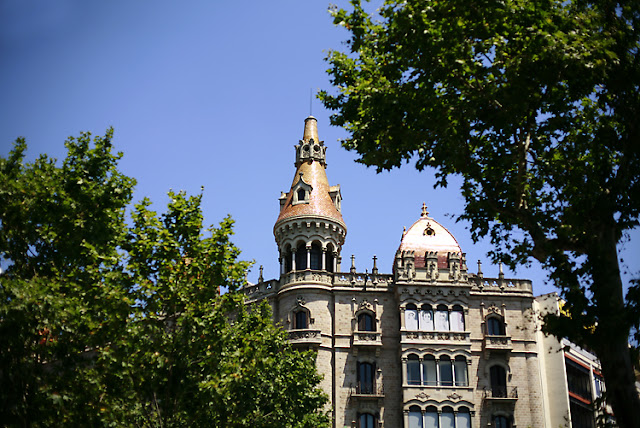 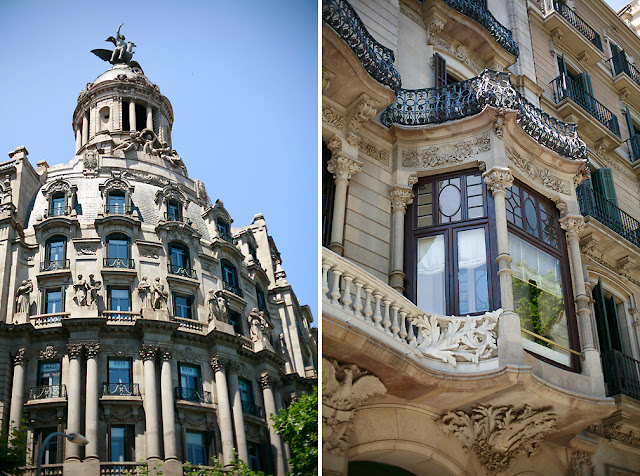 This is the Casa Batlló by Antoni Gaudi.  I adore him. His creations are so whimsical and playful and are still to this day extrememly new and avant garde and exciting.  This house was designed to look like an underwanter sea creature and to give you the feeling that you are underwater.  Most of the house is created with only organic shapes and lines, nothing is straight.  Everything was thought out with ergodynamics and ingenuity beyond his time and even ours.  This house is definitely one of my favorite things ever in the world (and his church which you will soon see)  This is the main salon, doesnt it look like you are staring out of the mouth of some great sea dragon? 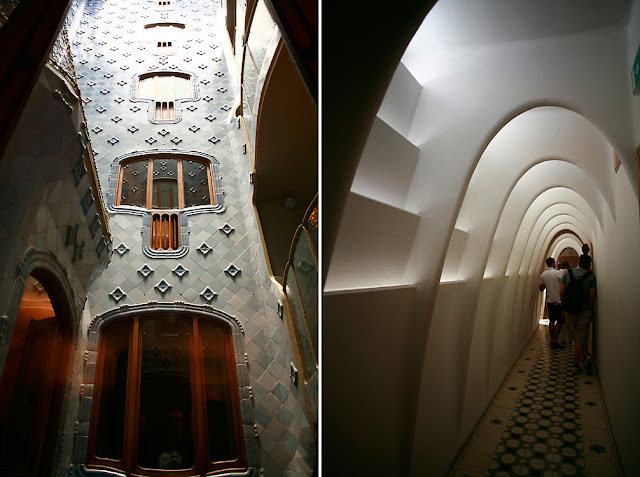 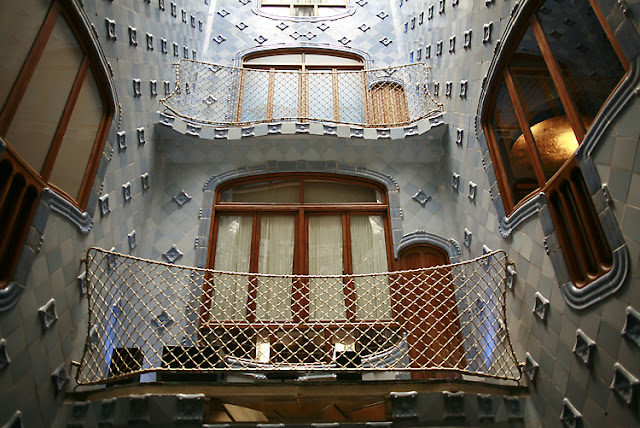 The rooftop was where Gaudi really let his imagination run wild.  Here, he designed the spine or tail of his sea dragon, invented a new chimney system and added his signature cross. 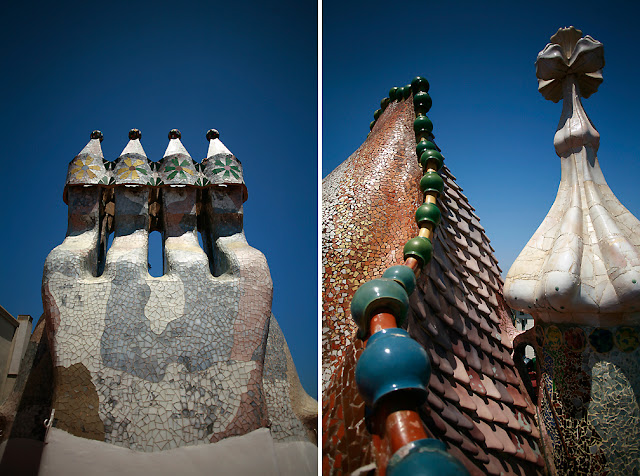 Here are some details of the stair well, doesnt it really make you feel like you are underwater? 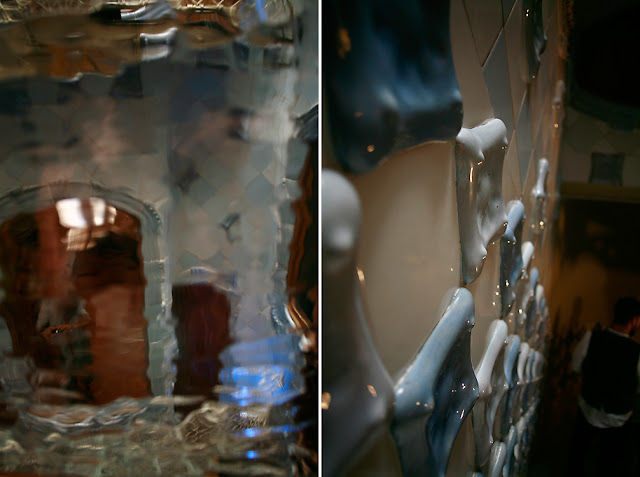 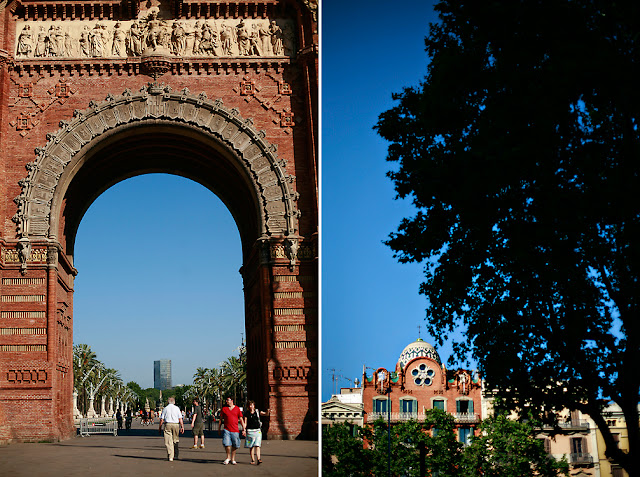 Details of the bridge in this area. 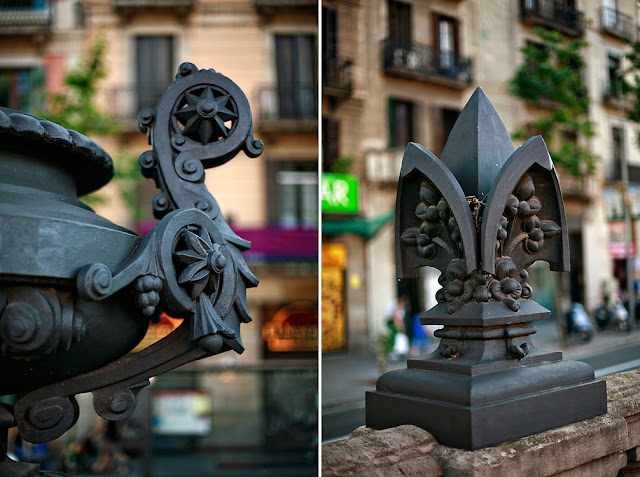 The infamous market, Mercat St. Josep where you can buy a plethora of meats, fruits, veggies, cheeses and these delicious fruit smoothies.

Down by the harbour at sunset. 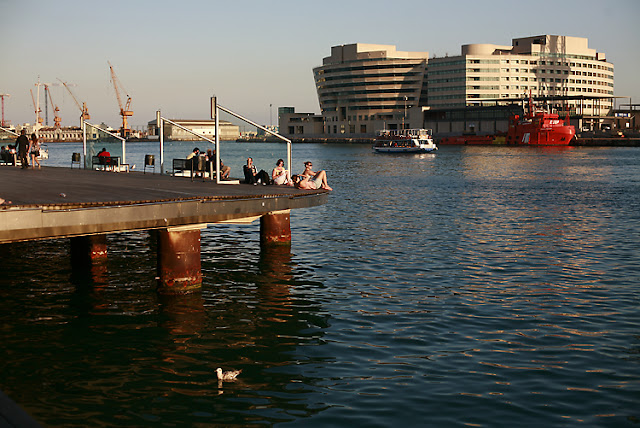 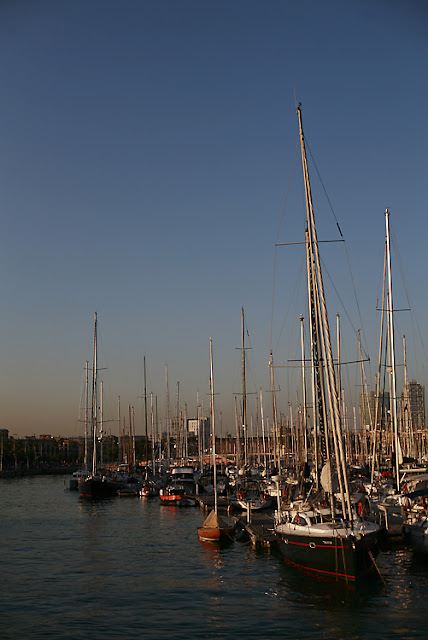 On day two, we woke up early to visit the Sagrada Familia, my favorite church ever.  Its so incredibly different and special and the interior is recently finished so I was excited about seeing it again.  The interior was very much inspired by nature and specifically Gaudi wanted the people to feel as if they were in a forest. 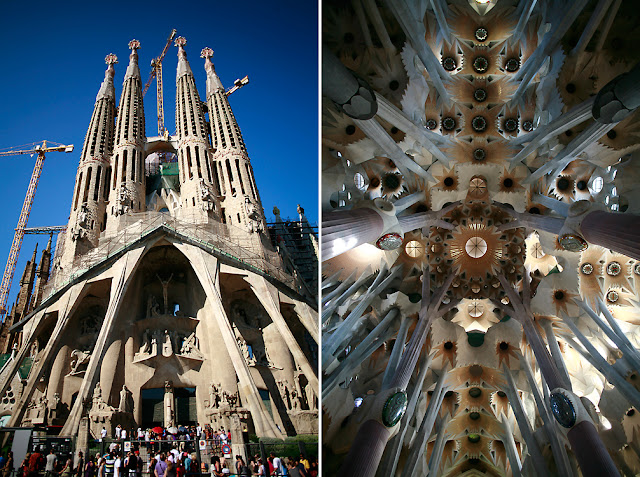 Many churches feel very dark and heavy on the inside but Gaudi’s is light and airy and very bright with lots of beautiful shapes and colors.  Its the most awe inspiring thing Ive ever been in. 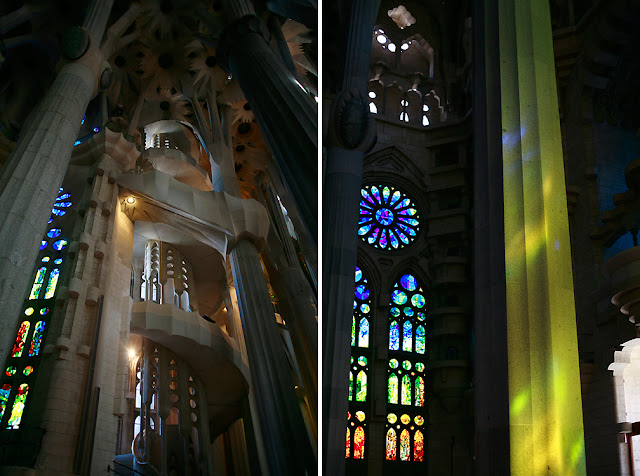 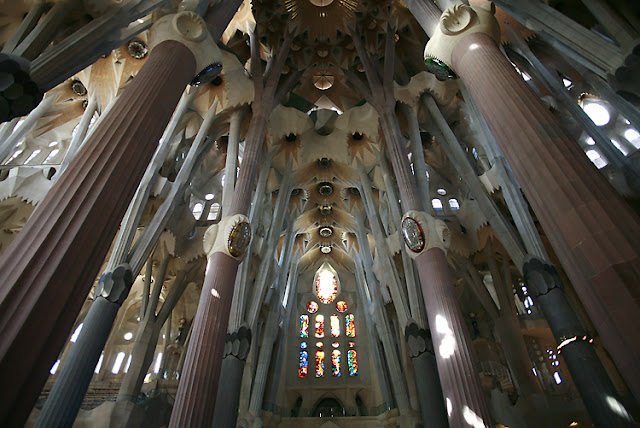 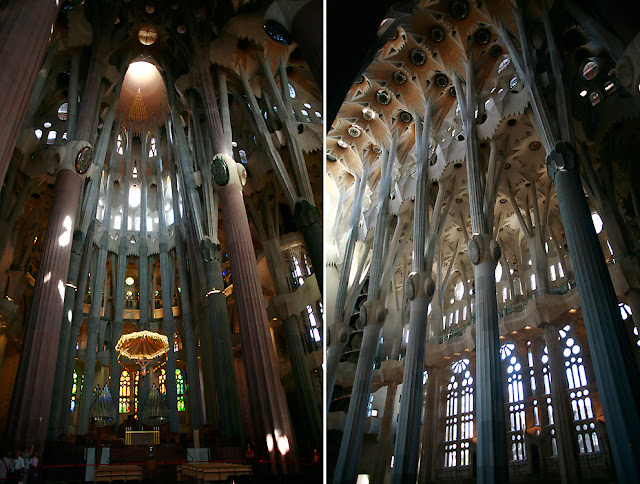 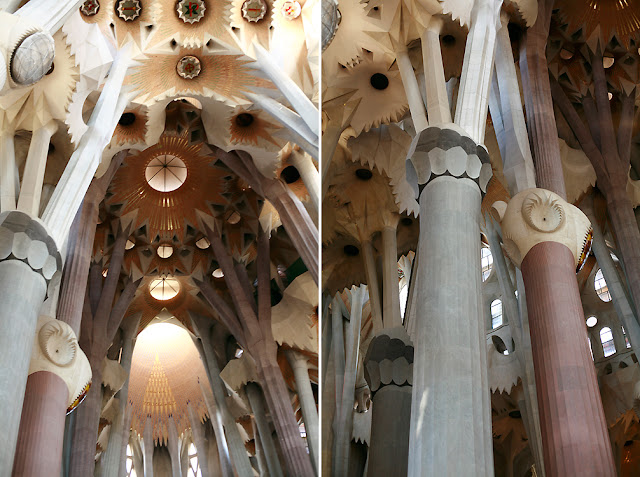 Then we headed to the Park Guell, also designed by Gaudi, with his usual whimsical and playful elements.  The two buildings at the entrance look like gingerbread houses and were inspired by fairytales. 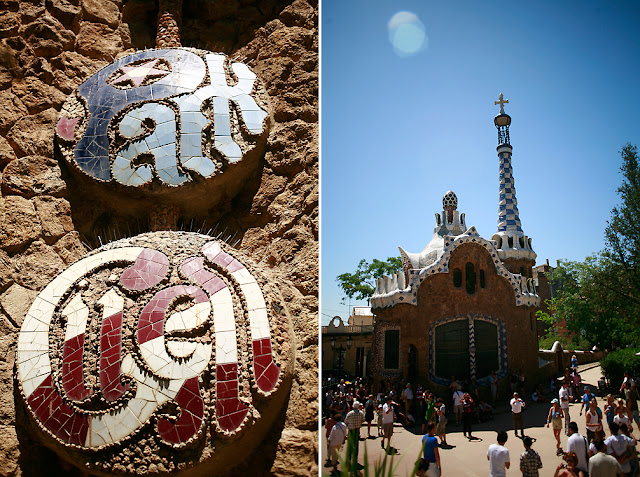 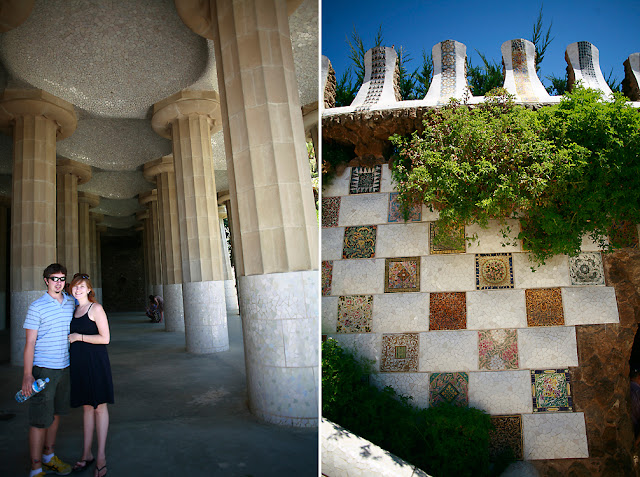 We are now in San Sebastian and everyone is asleep. But I figured Im so behind on the blog I better stay up and get something done!! Ive got lots more coming so please keep checking back. And please go have a look at Martin’s travel blog – he gives much more interesting history and details to our visits – and you get to see more pictures!!!