The next day our goal was Burgos, one of the biggest cities along the Camino.  I had never been, so we wanted to get there early so we’d have lots of time to play.  It was a short day, only 16 or so kilometers but due to several frustrating mishaps, we didnt arrive until mid-afternoon.  Ill spare you the details but when you waste precious steps on the Camino, it can really keep your mood sour and your feetsies hurting.  Here’s a beautiful sunrise view of Atapuerca, the town right after Agés. 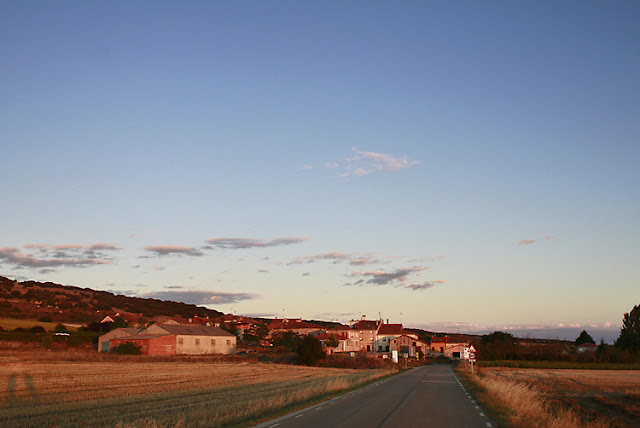 We started a very steep, rocky incline along a military base/zone.  We were amazed at how crappy the fence was, you could SO easily walk right through that barbed wire.  I guess no one is threatening the Spanish military.  The path here was so rocky that bikers had to dismount and walk. 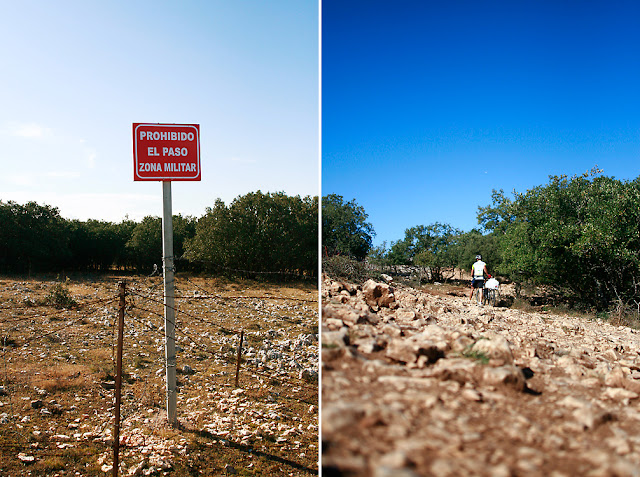 But once you got to the top, the view was breathtaking.  I think this was one of my favorite moments, seeing this huge natural art installation. 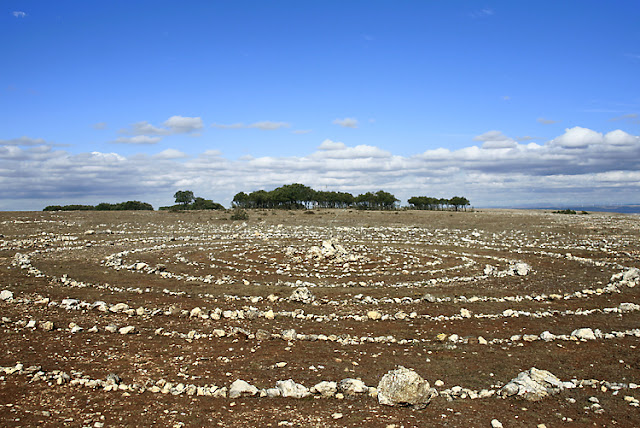 There’s a sign here saying that this view of Burgos is the prettiest view on the whole Camino de Santiago…its pretty, for sure, but I think there’s better ones…. 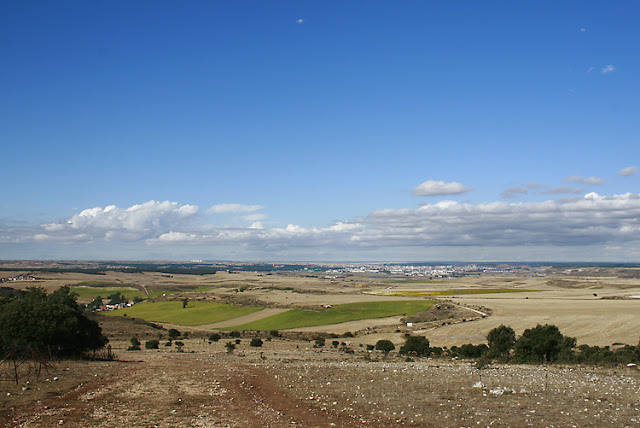 Like these sunflowers! And this mural is funny and so true. 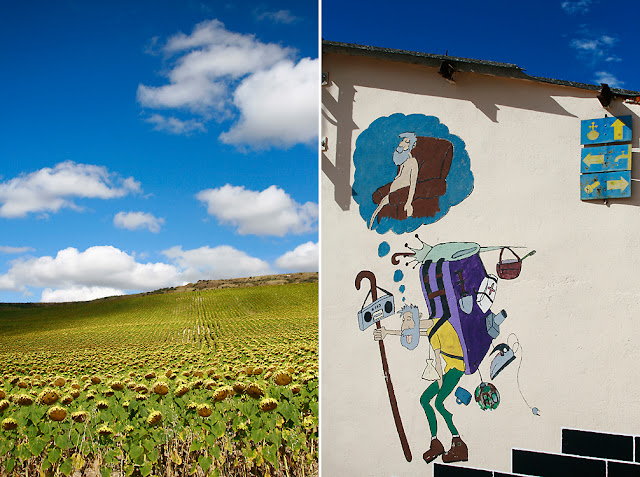 We finally made it to Burgos, checked into our albergue and took a walk around the city.  On the right is the view from the bridge.

And all along the bridge are these statues. 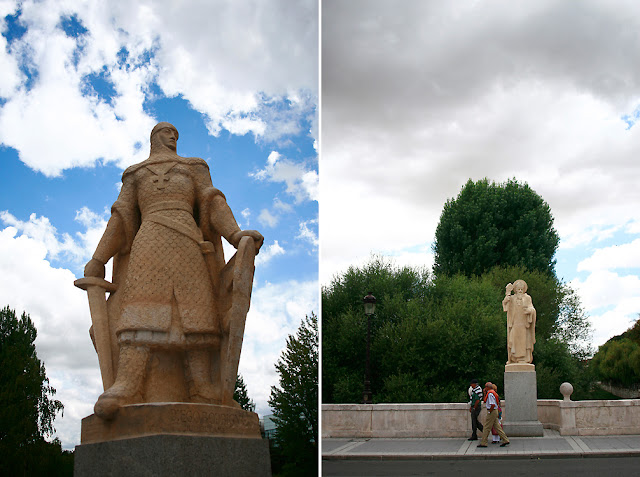 A lot of Spanish cities have these people statues all around – there’s several in Madrid – but there were tons in Burgos.  My favorite is the girl with the umbrella because there’s actually water dripping from it.

The cathedral is pretty spectacular.  After awhile, you sort of tire of churches and many of them just look the same but this one was special because of the ceilings.  I had never seen ceilings that this before and I just loved the star designs. 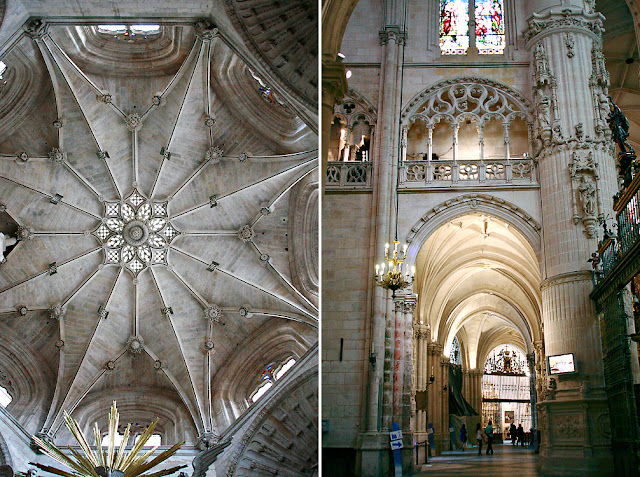 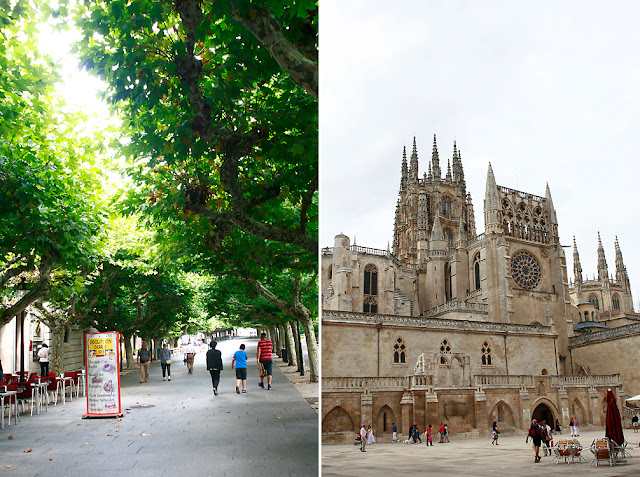 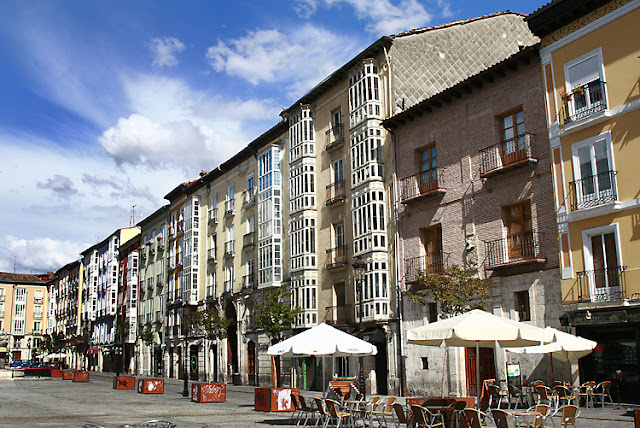 Many people do the Camino in parts so some who started with us in Saint Jean Pied de Port or in Roncesvalles ended in Burgos.  And some people use big cities to take an extra day’s rest.  So we wanted to make sure we got some photos of the folks we had met up to this point in case we didn’t see them again.  On left is a French couple who started on the eastern French border.  That means they had already been walking for 40 days or so! In the middle is Stefano, the Italian I already mentioned.  And on the right is a family from Colorado.  The dad is in his seventies and had already hiked the Camino 4 times!!! 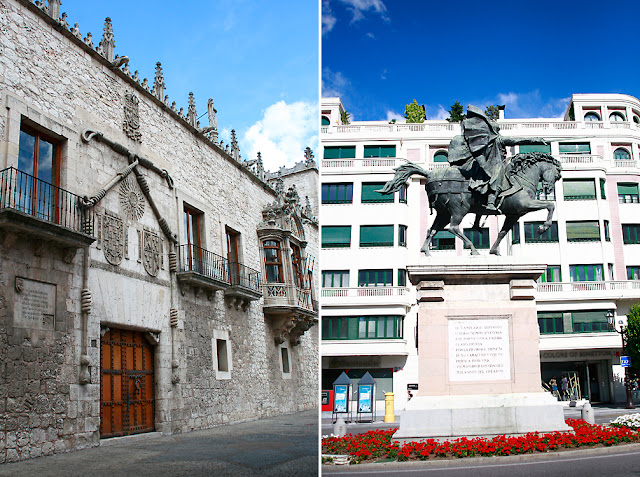 The next day stayed pretty gray and overcast, nice for walking, crap for pictures. 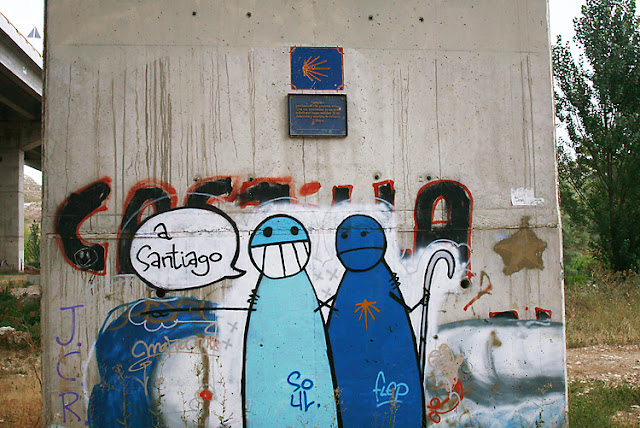 For some reason today, our feet and legs were especially sore and all we wanted to do was reach Hontanas so we could sit and rest! Unless you’re walking in the woods, you can usually see the towns a few kilometers out, and once you can see your goal, walking becomes a bit easier.  However, we kept getting closer and closer and closer to where we knew this town should be, but yet there was no sign of it.  Here you can see a sign saying its 0.5 km away and STILL we couldn’t see it.  Torturous! Its because the town sits down in a bowl so you really don’t see it till you’re right in it. 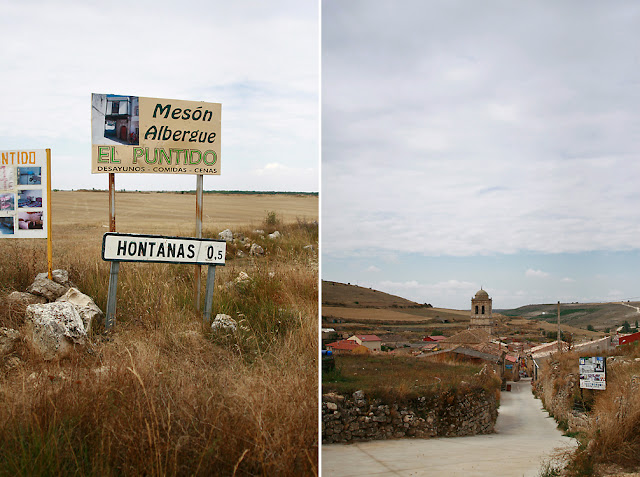 Luckily, the sun decided to come out so we were able to get some nice pics and dry clothes!

The next morning we came upon ruins of a monastery.  There were GORGEOUS! Unfortunately it was still quite dark out so it was hard to photograph. 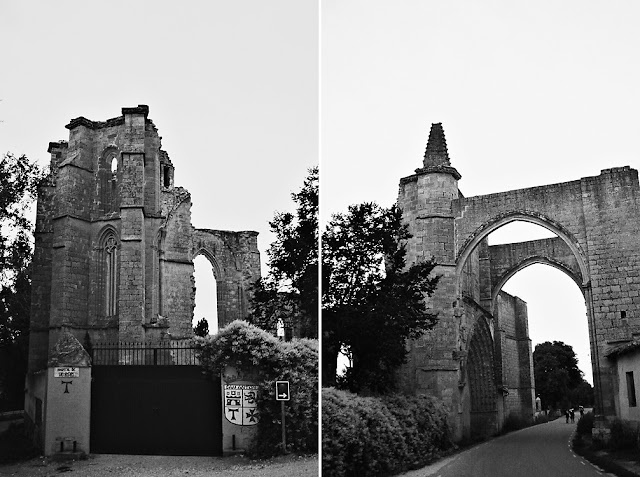 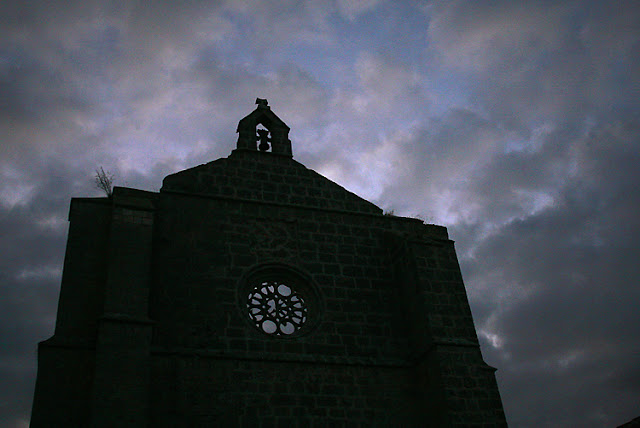 We stopped in Castrojeriz for breakfast and to rest with our two new buddies, Richard and Jean Paul, two awesome guys from Canada.

It ended up being a spectacular day and we got tons of beautiful pictures. 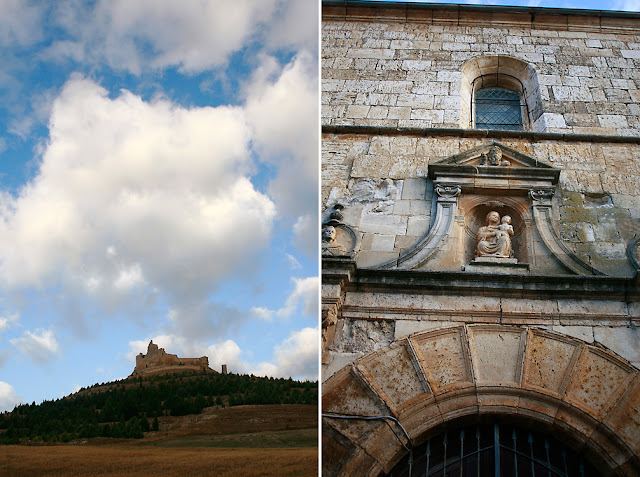 Flat flat flat…..and no shade!….and you can see this part of the camino is lacking in girl pee pee spots. 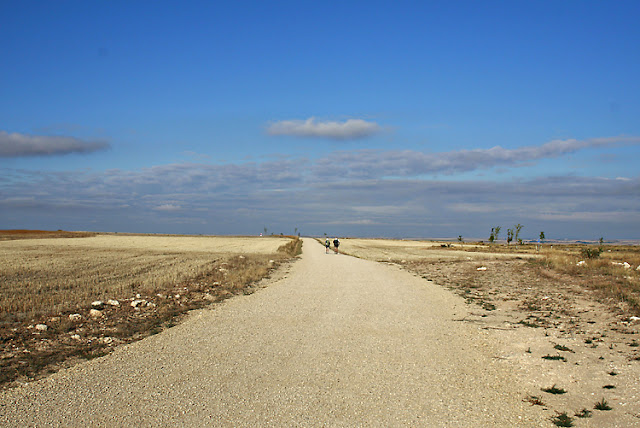 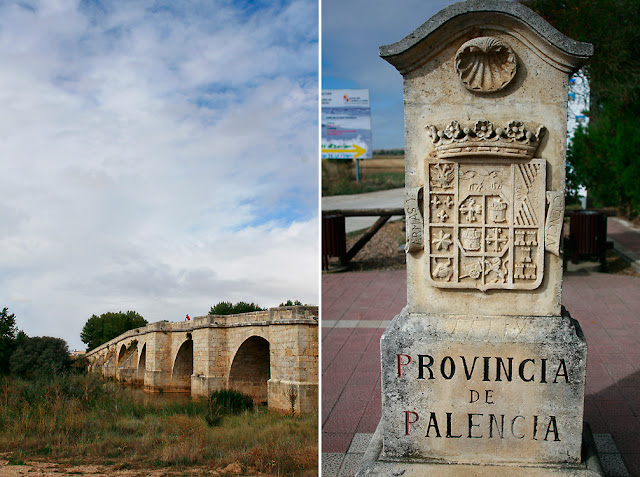 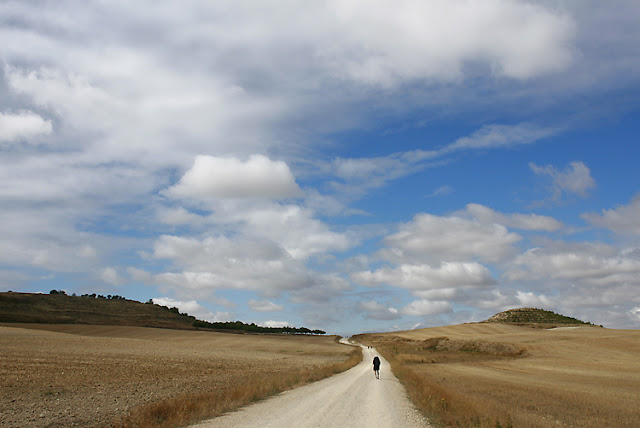 We saw a shepherd with his flock and this turned out to be one of my favorite pictures that I took. (by the way, Martin took a lot of the pictures during the trip, didn’t he do gooood?) 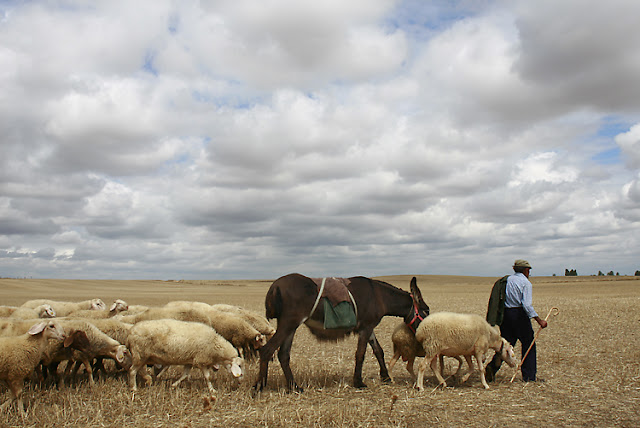 On the right is the albergue where we stayed in Boadilla.  I thought it was one of the prettiest, especially with the view of the church in the background.  However, the obscene amount of flies that are in these pueblos made it really hard to enjoy.  The best part was the communal meal, it was delicious and a nice break from our sandwiches and pasta. 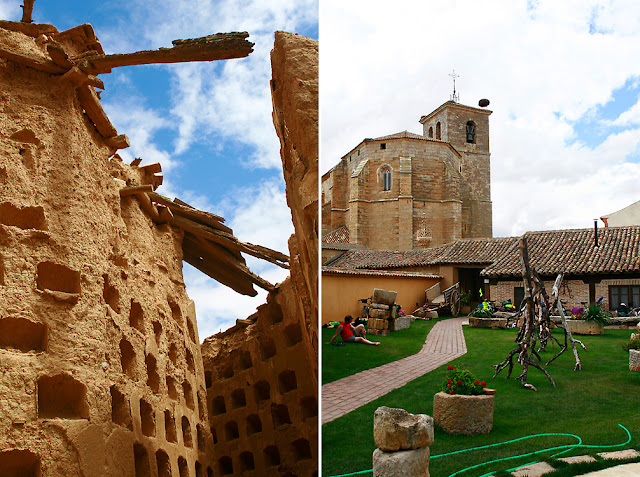 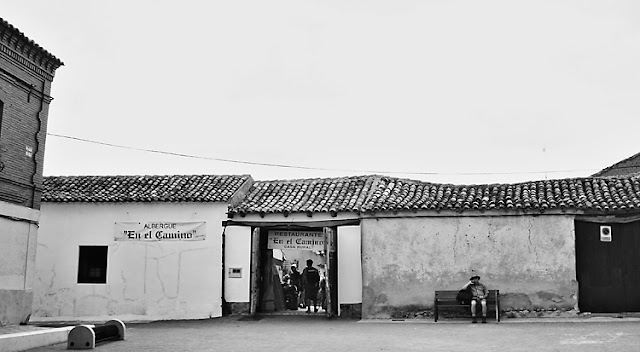 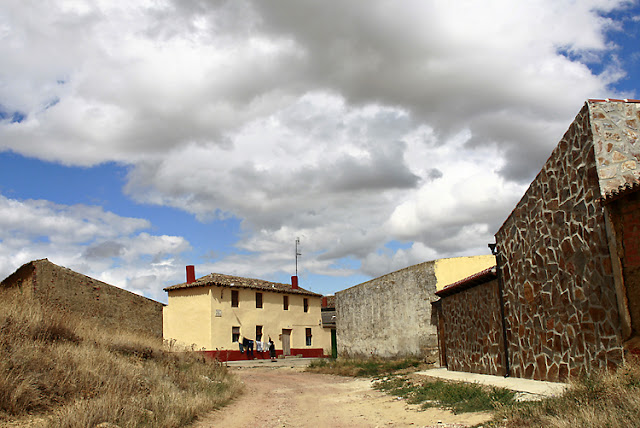